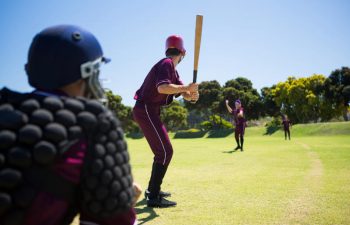 One of the most common injuries we see in baseball is a torn ulnar collateral ligament (UCL). This occurs when a pitcher throws the ball, then grabs his elbow. In most cases, these players choose to have Tommy John surgery to reconstruct the UCL.

WHAT IS TOMMY JOHN SURGERY?

ORIGIN
Tommy John Surgery is named after a Los Angeles baseball pitcher who tore the inside of his elbow and had surgery to rebuild it. The surgeon, Dr. Frank Joe, invented the procedure to rebuild ligament inside the elbow. It was so successful that 25 years later we call the procedure Tommy John Surgery.
PATIENTS
Athletes who throw very hard, like baseball pitchers, or javelin throwers usually get Tommy John Surgery. For everyday folk, it is less common.
PROCEDURE
Elbow ligament is replaced with a healthy tendon from the patient’s arm or leg, or from a donor’s. The tendon is threaded through holes in the bone around the elbow.

Rehabilitation therapy for Tommy John Surgery takes about 1 year for pitchers, and 6 months for position players. The following is a general timeline of the rehabilitation process:

1 to 2 Weeks After Tommy John Surgery
The goal is to control pain and maintain motion in the shoulder and wrist. The elbow is placed in a brace with no movement in a 90-degree position. The player is still able to move his wrist and shoulder.
2 to 6 Weeks After Reconstruction
The goal is to increase movement in the elbow so the player can regain full motion by the end of the sixth week. This is accomplished by increasing the range of motion the brace allows.
6 to 18 Weeks After Reconstruction
There is a minimal increase in exercise intensity. But exercises for the shoulder and scapula will become increasingly harder and encourage safe elbow motion. These exercises will help strengthen and prepare the pitcher to start throwing again.
18 to 40 Weeks After Reconstruction
The pitcher starts throwing a baseball 30 times at 45 feet every other day. Then progresses to 50-60 throws, increasing by 30-foot increments every two to three weeks. The end goal is 100 throws with 24 of those throws at distances as high as 210 feet.
8 to 10 Months After Reconstruction
As soon as his throwing strength is reached, the pitcher progresses to throwing from the mound. Pitchers will throw 20 to 25 pitch bullpens. Additionally, they continue the long toss three times per week. As soon as he can throw 40-45 pitch bullpens with good mechanics, the pitcher throws in batting practice and eventually pitch in a live game.

If you have found yourself on the sidelines due to a sports-related injury or pain in New York, schedule an appointment or call us at (212) 310-0100

Having performed surgery for decades my neck And back have been damaged. I can honestly say that Rachel has kept me functioning at a high level. Nobody else was. Despite being a surgical candidate which is refused to have she managed to overcome all of my problems. The office is also immaculately clean ( I am a germaphobe). Chiro in the past was hit or miss. Sometimes it helped and sometimes it actually made things worse. This has never happened with Rachel. I always feel better. Guaranteed. She will bend over backwards to accommodate my schedule. She is a rising star.

The entire staff is very helpful, kind, and extremely efficient. If it wasn't for Dr. Rolland Nemirovsky I strongly feel the bursitis in my shoulder would still be in major pain. If you have shoulder pain, rotator cuff issues, or bursitis don't hesitate, RUN to see this man! I came to Manhattan Sports Therapy skeptical because I had already visited two other physical therapist who were not getting me better. I had pain for 9 months until visiting MST. Nemirovsky was patient with my healing process and was always transparent when telling me what stages I was in my recovery. Now I am fully recovered back to pumping iron and putting on a backpack without pain. Thank you to everyone in that office for making my experience great from start to finish.

I was having severe inner hip and lower back pain for months. Every step I took was painful. I couldn't run, bike, swim or even attempt a workout. I started seeing a PT twice a week for a month and nothing happened, in fact, my pain increased. So, I decided to try another Physician and I found Manhattan Sports Therapy and Dr. Rolland Nemirovsky. After my first appointment, I knew I made the right choice. I started seeing Dr. Rolland twice a week. After my first week, I could already feel a HUGE difference. After week three, the pain in my hip was completely gone. It's now been two months and as I continue my treatment, I'm feeling better and better. I ran five miles for the first time in over a year last week! I highly highly recommend Dr. Rolland. He's the best at what he does and he's very knowledgable when it comes to health and fitness all around.